Within the vast arena of industrial control in general industry there are many unique specialised tasks that can not easily be undertaken using existing hardware. This applies to all three of the primary forms of control, Distributed Control Systems (DCS), Programmable Logic Controllers (PLCs), and Supervisory Control and Data Acquisition (SCADA) systems. The latter refers to long range control for oil and gas, water, high voltage powerlines and railways, as opposed to operator station interfaces connected to PLCs.

The DDAC system consists of a series of small modules each with a specialised purpose. The modules are not intended to replace existing types of controller such as a PLC or an RTU but to add extra capability. Connectivity is supplied via Modbus over IP.

The historian is able to send recorded data to a mobile phone or bundle it into a spreadsheet to be sent via email. 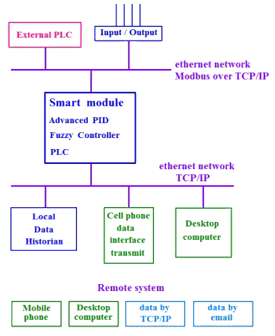